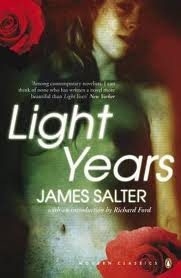 James Salter's prose are like the early waking hours where you are caught between reality and the oscillating waves of your dreams, his writing style is sparse and pared down, a precision and mastery of language.

Reading Light Years was like being a fly on the wall, watching as the spider of fate and destiny spins her web, entrapping the protagonists one after another in her silken threads. As they pursue their lives, their dreams, while they search for their identities, slowly the chords are wrapped tighter and tighter, each one falling into the same trap, the promise of love and the hope of being truly understood.

The story of Viri and Nedra is one of a families growth and dissolution. It is filled with the intimacies of everyday life, the relationship with objects, the sounds of movement, the sacred rites of sharing a meal. It is a novel about relationship, like Anna Karenina only from the perspective of Vronsky, a man who spends his life seeking the counterpart of his soul, whose unhappiness is tangible... "He was self-indulgent, a failure. He had not abandoned failure; it was his address, his street, his one comfort. His life was one of intimacy and betrayal. Of himself he wrote: extravagant, false. He was impractical, moody, a deviate. He suffered and loved like a woman; he remembered the weather and the menu in restaurants, hours that were like a broken necklace in a drawer."

Viri watches Ibsen's The Master Builder and see's himself. The portrait of a failed architect begging his mistress not to leave him makes him sick and yet doesn't call forth change. He leaves the theater and continues his pilgrimage of inefficacy and failure, knowing in his bones that "One of the last great realizations of life is that it will not be what you dreamed."

Nedra is married to a man that can give her everything except what she wants, wealth. Although they live in an upper-class world, where she reigns supreme at dinner parties, the men wanting to be near her, the women wanting to share their intimacies, her marriage has become a prison of which she can only dream of escape.  Although Nedra demands change and eventually flees the confines of her cell she never truly grasps what she's looking for. She has no wealth but is ultimately free.
at July 26, 2012