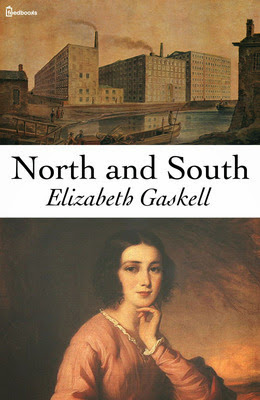 Margaret Hale, after spending nearly 10 years with her cousins in London returns home to the peaceful idyllic hamlet of Helstone. Her overly petted cousin Edith has been married to captain Lennox and the captain's younger brother is quick to make his feelings known to Margaret who is put off by his overt courtship. Perhaps Mr. Lennox is a little too confident in his good looks and charisma; he is only slightly abashed by her refusal and although Mr. Lennox departs from Helstone lacking the spoils he anticipated, we, the reader are certain we have not seen the last of him. Doesn't it always seem like the rejected lover always slowly woos the heroine or persistently earns her love?

Margaret's father has been a pastor, but now, after wrestling with his faith, has turned his back on the church and has become a dissenter. He in good conscience can no longer live in the rectory and perform his duties, so he and Margaret, after much deliberation, decide to move the family north to a small mill town, Milton, recommended to them by Mr. Hale's good friend and Margaret's godfather Mr. Bell.

After living a cosmopolitan life in London, the move back home to Helstone was a quiet reprieve from city life; Milton, on the other hand, is far from idyllic. It is a busy, bustling, dirty mill town. Margaret is shocked by the simple baseness of the place, and with a sickly mother to take care of slowly retreats into the solitude of their temporary housing. Mrs. Hale is the classic sickly mother, babied and petted by Margaret and her father...the type of character that is only good as a slow drawn out foil for the heroine to dutifully nurse.

To earn a little extra income, Mr. Hale has become a tutor for the mercantile baron of Milton, Mr. John Thornton. Mr. Thornton is a self made man, a Silas Lapham type. When younger, his family was not of considerable wealth, but had the means to send John to school. His father, a gambler, lost the family savings and then in despair hung himself. John, a young boy, was forced to come home and support his mother and younger sister. Slowly by a life of frugality he and his mother were able to save their money and stone by stone, rebuild their family estate. Mr. Thornton is the new "american dream" type. Through hard work and perseverance he has crafted a life of success...but success in a class system is different than the idyllic success of the american dream, and while Silas Lapham was a simple minded hard working type, that knew that through enough conspicuous consumption could purchase his place in society, the idea of purchasing status would be anathema to Mr. Thornton, and instead he uses his great wealth to purchase knowledge, something that can never become valueless or be destroyed.

The Hales, although poor, are of a good family line and in another place and different life would hardly associate with the working classes beneath them. Margaret and Mr. Thornton are at odds with each other from their first encounter. Their verbal sparring often leaves both of them frustrated and annoyed, but while Margaret's incredible beauty is enough to assuage any lasting feelings of annoyance, the same can not be said of Mr. Thornton. Margaret is not enchanted with Mr. Thornton, and her disenchantment at times borders on disgust / loathing.

Slowly, as Margaret acclimates to their new way of life, she begins to appreciate the hard working people of Milton and becomes friends (in the most liberal sense of the word) with a working class consumptive girl named Bessy, who is constantly fainting and speaks of little besides her longing to die. Bessy's father is a worker in one of Mr. Thornton's mills and as rumors of the discontented workers begin surfacing, a strike begins to brew. Margaret takes it upon herself to become a sort of mediator and during their somewhat frequent discussions she tries to interpret the workers' desires in a more favorable way then they are apt to discuss. In a somewhat overly melodramatic scene, Margaret throws herself in front of Mr. Thornton as a mob of angry men begin to approach him threateningly and pick up stones to throw at him, shielding him with her body she begs the men to retreat and be sensible. But as she stands there, a small and delicate shield, a rock, meant for Mr. Thornton strikes her and she collapses into a dead faint.

Quickly she is taken into Mr. Thornton's house and cared for by a less than enthusiastic mother and an almost useless sister of Mr. Thornton's. Between fits of unconsciousness, Margaret hears Mr. Thornton's sister saying that Margaret isn't good enough for her brother and that it's pretty brazen to throw yourself in front of your would-be-lover in front of angry mob of striking men just to get his attention. Margaret's pride is wounded perhaps more by a few words than any rock could have done and she musters all her strength to hobble home into the sanctity of her family's solitude.

Mr. Thornton, who has a similar interpretation of Margaret's motives as his sister almost immediately rushes to Margaret to propose. Margaret, indignant, refuses. But Mr. Thornton being stubborn and headstrong decides that he will quietly love her from afar, but that his affections will never change.

First Margaret's mother dies, then shortly thereafter her father dies of a sudden heart attack, leaving Margaret orphaned, isolated and without direction. She desultorily makes her way back to her cousins, having no where else to go and little purpose or desire to think for herself. Her cousins are narcissistic egoists and after about five minutes decide they have spent enough time in mourning and that they must give and attend the parties of the season leaving Margaret alone, a prisoner in another's house. She can not come and go as she pleases without their doting approval or passive aggressive denials. And then suddenly her godfather Mr. Bell dies as well leaving Margaret his vast fortune, and now as an heiress she sits and waits for the winds to carry forward some sense of purpose, which they do in an opportune visit from Mr. Thornton.

Since we have seen him last, Mr. Thornton, again like Silas Lapham has lost everything. Because he could not be persuaded to participate in a money making scheme, he ends up losing his considerable fortune and once again picks himself up and starting from the bottom, slowly begins to work his way back to the top. Before the collapse of his fortune he has begun a somewhat socialist experiment with his men, by building them a dining hall, providing meals and occasionally sharing a meal with them he was able to discuss matters before they came to a head and resulted in a strike. He has visions of new experiments, but now sadly is unable to see them through to completion. Margaret, decides this is about exactly her cup of tea as she could find and suggests putting her fortune into his plans, restoring him to master of the mill and supporting his experiments. Mr. Thornton takes this as a proposal of affection, to which he accepts and they live happily ever after.

Gaskell brings into an otherwise predictable romance novel, the immediacy and tangibility of Victorian England. After the French Revolution, the English gentry was constantly on guard lest their lower classes revolt as well, and yet there were dramatic changes taking place that could not be ignored. Experimentation with different aspects of socialism were being discussed in salons while the working classes struggled to feed their starving children, the disconnect between theory and reality was tremendous as is often the case. What Gaskell suggests as a solution has become a sort of foundation of contemporary unions; a place to discuss problems in a sort of forum where the workers become valuable members of an organization rather than just mindless functioning automatons. Her heroine listens to the workers and values them as legitimate people and she ultimately marries someone from another world and class order from herself, a theme that became continually more popular in Victorian novels in a world where the abolition of class seemed like an attainable possibility.
at December 10, 2013