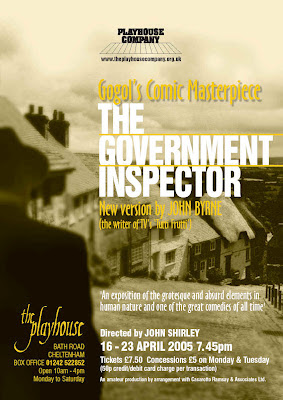 The Play opens with news that an Inspector General will be making an appearance incognito, creating havoc and chaos for the small town assembly. Quickly they begin to try and hide their vices. The Chief of Police is cautiously reproached for taking bribes.

"There are sins and there are sins. I tell everybody openly that I take bribes, but what kind of bribes? Only wolfhound puppies. That's absolutely another matter!"

They quickly assume that in order for Government Officials to make an appearance, there must be a war brewing with Turkey. As terror grips them, they agree that the best course of action for now will be for the Postmaster to read all outgoing and incoming letters from now on. The Postmaster quickly assures them that he's been doing so for quite some time!

Finally, they discover the official has been living within their midst for the last few weeks, and all hell breaks loose and they frantically try to put things in order. Ducks must be removed from the town square, the sick patients in the hospital must be thinned out and their diseases must be inscribed in Latin above their beds, bribery must be abated for the time being and all drunks must be forced to eat onions and garlic to shroud the scent of vodka on their breath.

"An inspector has come! With a mustache? What sort of mustache?"

Meanwhile, Khlestakov's money has run out and he has been living in abject poverty, begging the kitchen for food each day, while he hides away in his room at a little decrepit inn unable to pay for his room and board. He is forced to subsist on feathery soup and roasts comparable to tree bark.

The Chief of Police makes his appearance, both under different impressions as to the meaning of the visit. Khlestakov begins to defend his inability to pay his rent, while the Chief of Police defends the butchers, the general productivity of the town and tries to appease him in any way possible.

Khlestakov, quickly realizes their is some misunderstanding and he has been taken for a General of sorts, a role he was born to play. He immediately uses this to his advantage and openly accepts bribes of all sorts as they begin to take him on a tour of the town.

"From the time I undertook management [at the hospital] - incredible as it may seem to you - all of the patients have been getting well like flies. A patient can hardly enter the hospital before he's cured, not so much by the medications as by the reliability of the management."

Slowly the city officials present themselves and begin to air their grievances, hoping to bribe Khlestakov into making a favorable report. Khlestakov abruptly asks each visitor for a loan of 300 rubles, which each is happy to accommodate except for a few of the poorer officials whom he graciously accepts 75 rubles from.

As Khlestakov gets ready to depart, fearing his subterfuge may be discovered, he writes a friend of his a letter exposing his fraud and saying it might make good fodder for a story. The Postmaster intercepts the letter and quickly dashes the hopes and dreams of the townspeople who now realize they have been had by an impostor.

Only torture by ingestion of salted herring (a common practice to produce excessive thirst) would be good enough for such a scoundrel.