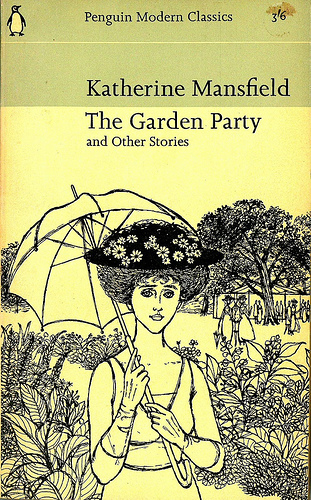 I'm going to do something a little different this month, I recently took a short course on Critical Reading and one of our projects was to practice close critical analysis of a text. I chose a few paragraphs from Katherine Mansfield's short story "The Garden Party". Next month I will zoom out and discuss Mansfield a bit more generally, talk about more of her works and her context situated in-between modernism and post-colonialism. Super fun! But for this month a perspective microscopically from within the text itself:

In “The Garden Party” Katherine Mansfield uses the image of the Karaka trees being hidden behind a marquee as a metaphor to highlight the complexity of identity for an adolescent girl hidden behind artifacts of class.

Like most modernist texts, the action in this short story is not conclusion driven, but follows the minutia of the everyday lives of a wealthy British family, living in New Zealand, as they prepare for an afternoon garden party. The tone of the text is filled with the tension and ambiguity of in-between space and the confusion of a multiplicity of voices. The characters are driven in and out, up and down, within the protected confines of their estate and out into the bleak and poverty stricken surrounding neighborhood; hidden between the lines is the question of who has an authoritative voice.

The adolescent girl, Laura, becomes the unlikely heroine of the story when the other options are exhausted. Her mother and sisters are too busy to go meet the workmen and Laura is obliquely introduced with the words: “You’ll have to go, Laura; you’re the artistic one.”

“Away Laura flew… she loved having to arrange things; she always felt she could do it so much better than anybody else.”

Later we learn that Laura’s sister Jose: “loved giving orders to the servants, and they loved obeying her. She always made them feel they were taking part in some drama.” As we will see, Laura has virtually no power to arrange anything. She hurries to obey the women in her family that clearly outrank her, only to find herself equally outranked by the workmen. The motif of trapped birds is a recurrent image and it is interesting that the first verb associated with Laura is one of flight.

One of the workmen is described as having “a haggard look as his dark eyes scanned the tennis-court.” The OED defines haggard as “(of a hawk) caught for training as a wild adult of more than twelve months.” A trapped adult bird. Later, when Laura visits the surrounding neighborhood, this imagery comes up again in the dismal description of the cottages, where one man has “studded” his house front with “minute bird-cages.” The inhabitants, both human and fauna are trapped, their lives are  “shreds and rags” in contrast to the “silvery plumes” of the Sheridans.

My close critical analysis will focus on the three paragraphs beginning with “Against the Karakas….She felt just like a working girl” to explore how the Karaka trees symbolize the isolation that Laura exists within, being both unseen and unheard. She is commanded to do things eight times throughout the short story, by both family members and the impoverished neighborhood women and always obeys. She has little agency and no volition.

“Against the Karakas.” The text is filled with truncated sentences that create an overall feeling of tension, but this simple sentence also names the trees. They are not just foliage used as a demarcation between the Sheridan’s property and the surrounding neighborhood, but they are an identifiable species, with a history and a name that predates the arrival of the Sheridans.

“Then the Karaka-trees would be hidden.”  Being hidden in plain sight is Laura’s predicament.   Her family bosses her around like a servant, they shame her for being “overly sentimental”…she feels different from them and they only exacerbate that difference by continuously pointing out her short comings. Her emotional response to the lilies is later referred to as “low class.”

The narrative voice (third person omniscient) slips into FID and we overhear Laura’s mental assessment of this plan:

“They were so lovely…Must they be hidden by the marquee?”

Why does Mansfield specify the Karaka tree? All of the research I have done about indigenous trees of New Zealand has emphasized the significance of the Karaka tree for the Maori people. Using a tree with a rich cultural history that is invisible or insignificant to the Sheridans emphasizes Mansfield’s point: the tree is prized for its visible surface but its nature and significance is unacknowledged. Now the tree exists in a highly codified world where the will of the horticulturalist is imposed, and the trees are forced to bend to the aesthetic demands of others.

In order to be “proud” and “solitary" the Karakas must be removed to a desert island, outside the boundaries of the reality in which they currently exist. This symbolizes Laura’s own struggle. It is impossible for her to imagine herself, proud and solitary, lifting her own “leaves and fruit” in a kind of splendor, while trapped within the confines of her family’s estate.

The Karaka trees are described as having lovely “clusters of yellow fruit.” Here Laura stays at the visible surface, ignoring the toxicity of the interior pits and ultimately disregarding the nature of the fruit itself.

“ Must they be hidden by the marquee?”

While technically not enjambment, the question pauses at the end of the paragraph elongating the space that waits for an answer. This pause and temporal stretching emphasizes that this decision is beyond Laura’s control. She is ultimately powerless. Like the trees, fated to be hidden, her own invisibility is outside of her control. She must be hidden as well.

Like the Karakas with a toxic pit hidden beneath the surface, Laura’s genuine concern for others is slowly buried under the surface of a different object: the hat. Similar to the trees, who have no voice in the decision to be hidden, Laura has the hat thrust upon her against her will. In the same way the trees are hidden by the marquee, an artifact of class, Laura is hidden by the hat: a symbol of status and the power of consumption.

“She would get on much better with men like these.” As one of the workmen bends down to “pinch” a sprig of lavender, she recognizes a kindred spirit. Behind the surface expectations of his class, behind his freckles and straw hat, is hidden a man who cares for the smell of lavender. This gesture reveals a character who “sees” the beauty hidden within even the smallest things, an attribute beyond the “silly boys” of her own set that seem intent to occupy themselves with the trivialities of dancing and eating.

The next paragraph has another significant pause in progression as the tall fellow’s action is forcibly situated in the middle of the sentence.

“It’s all the fault, she decided, as the tall fellow drew something on the back of an envelope, something that was to be looped or left to hang, of these absurd class distinctions.”

The “absurd class distinctions” have trapped people of both sides into expected behaviors and individuality has become a type of collateral damage. While the workman displays sentimentality in his appreciation for lavender, Laura’s appreciation of the lilies will be ridiculed, and the workman’s gesture seems somehow out of place. Neither of them are allowed the freedom to be sentimental, and instead are isolated being almost cursed with the ability to see and appreciate the world around them.

“Well, for her part, she didn’t feel them. Not a bit, not an atom…” In the midst of the workmen, she finds a longed for camaraderie, she is not constrained by the “absurd class distinctions.” While this is an endearing sentiment, the ellipsis emphasizes a tension between what she perceives and her reality. The class distinctions don’t define her because as an adolescent she exists in a liminal state where everyone outranks her, she has no purchasing power and therefore belongs to neither class fully, having no voice or identity that is recognized.

Her thoughts are interrupted by a cacophony of sounds. The “chock-chock” of the hammers, a whistle, a song. Mansfield frequently uses onomatopoeia as an aural effect to plunge the reader into the soundscape. This short story isn’t quiet and contemplative, it is loud and confusing. There is almost a type of narrative chiasmus between Laura’s dreams and hopes of belonging being interrupted by a supporting orchestra of friendly companionship in contrast to her sister loudly playing the piano “Pom! Ta-ta-ta Tee-ta!”  and then doing her best impression of sentimentality as she sings a song about the weary life where hope comes to die. Hope followed by music, and music followed by dying hope.

“She felt just like a work-girl.” In these three paragraphs we see Laura at her happiest and least constrained. She would gladly exchange her class and presumed status to simply belong to anyone, but it is her overwhelming isolation and her need to belong that ultimately control her. When Laura begs her mother to reconsider postponing the garden party, her mother redirects the conversation by placing a hat upon her head.

The adjectives used to describe her before the hat were all pejorative: absurd, extravagant, sentimental. But now with the hat she has become stunning, becoming, striking. The hat gives her purchase, it is an artifact of belonging. Laura doesn’t take the hat off, she doesn’t fight to be heard or seen, instead she sees her reflection in a mirror and has an epiphany: with this hat she can be seen! She can belong to her family.

These absurd class systems are ultimately responsible for burying identity behind artifacts of class. The tree is buried, unseen behind the marquee and Laura is buried beneath her hat. Ultimately, when she meets the dead man, she apologizes for her hat, for choosing to belong rather than choosing to care. The narrative ends abruptly, almost mid-sentence, as Laura says “Isn’t life-“ and then is unable to finish her thought. There is no happy conclusion, and the reader is left in an atmosphere of tension wondering if she’s made the right decision.