The Girl from Samos - Menander 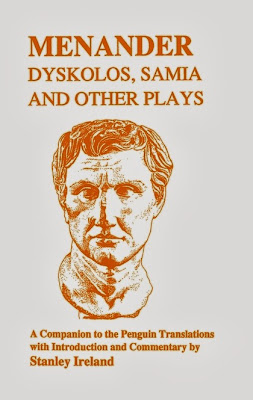 The extravagant, phantasmagorical comedy of Aristophanes and the climate of the early 400's BC has slowly been replaced by the narrowed scope and limited range of domestic issues in the comedy of Menander. "Athens had first of all been defeated by Sparta, and then taken over by Macedon. Alexander the Great died just about the time Menander started writing, and struggles between and with the subsequent succors of Alexander dominated Athenian politics most of the playwrights life." (Norma Miller, 1987)

Athens, no longer mistress of her own city, was covered by a cloud of political uncertainty and domestic turmoil. Politics were no longer a suitable subject for comedy and to try to make them such could be perilous for the writer. So comedy made a transition from the fantastic and improbable, such as a band of marauding women successfully taking over the government and creating a liberated utopia in the Assemblywomen, to the more realistic and complex comedy of The Girl from Samos, where the heroes are no longer gods and demi-gods or taken from the echelons of society, but instead the heroes are on the fringes of a citizen society grappling with issues like the substance of the family unit and legitimacy.

In an era steeped in hardship, Menander has been accused of escapism. Providing a safe heaven in the midst of the worlds he created for the middle class, but arguably the issues that faced the middle class were now mercurial and intimate and citizens were more concerned with the intricacies of life than of the sovereign, democratic city-state of fifth century Athens.

The Girl from Samos opens with Moschion, the adopted son of Demeas, bringing the audience up to speed on his life. He has always been taken care of by his father, and has had all that he ever wanted. Thanks to his father, he has become a civilized human being and in return for his father's kindness has behaved himself. All except for one tiny incident...

"I'll tell you about us at one go, I've nothing else to do -  then Father fell for a girl from Samos. Well, it could have happened to anyone. He tried to keep it quiet, being a bit embarrassed. But I found out, for all precautions, and I reckoned that if he didn't establish himself as the girl's protector, he'd have trouble with younger rivals for her favors..."

And so the fulcrum on which the play rests. Demeas has fallen in love with a younger woman and despite himself, there will always be in the back of his mind the suspicions of an old lover envying the young.

Moschion, for his part, is in love with their neighbor's daughter Plangon. And when both fathers leave for a quick business trip, the girl from Samos, Chrysis, and Plangon both realize they are pregnant. Perhaps Demeas is aware of Chrysis' pregnancy, but twenty or so lines are missing leaving a little opacity for the reader.

Before the fathers return from their trip, Chrysis has her baby and the infant unfortunately dies. When Plangon gives birth to her child, Moschion and Plangon agree it will be less incriminating if they give their child to Chrysis. They would like to obtain consent to marry and believe a child out of wedlock may not work in their favor. Upon the return of the fathers Demeas confronts Chrysis while Moschion stands in her defence:

Demeas: I thought I had a mistress, but it seems I have acquired a wife.
Moschion: A wife? What do you mean? I don't understand.
Demeas: I seem to have become - quite without my knowledge and consent - the father of a son. Well she can take him and get out of the house - to the Devil, for all I care.
Moschion: Oh, no!
Demeas: Why not? Do you expect me to bring up a bastard in my house, to humor someone else? That's not my line at all.
Moschion: For Heaven's sake! What's legitimacy or illegitimacy? We're all human aren't we?
Demeas: You must be joking.
Moschion: By God I'm not, I'm perfectly serious. I don't think birth means anything. If you look at the thing properly, a good man's legitimate, a bad man's both a bastard and a slave.

Moschion eventually persuades his father to keep the child, and moves on to the matter of his marriage. He would like to marry Plangon as soon as possible, to which both fathers agree. As the wedding preparations are in full force, Demeas overhears a servant mention that Moschion is the poor baby's father, and at once Demeas suspects his son of the worst treachery.

The rest of the play is spent trying to untangle the web of errors. While it is true the baby is Moschion's, like his outraged father accuses...the mother is Plangon, not Chrysis. Demeas runs about ranting about the trollop that like Helen has started a war, albeit a small one. When he comes upon Chrysis and the baby he screams at her to get out, she bewildered asks where she should go only to have Demeas shout "to hell! this minute!" Chrysis, without thought to defend herself, leaves and is momentarily housed at the neighbors', until the neighbors witness Plangon nursing her baby and eventually come to the realization that Chrysis is innocent in this particular affair.

Moschion, offended that his father thought the worst of him, decides to play a little prank; He will dress up as if leaving for battle and make his father apologize and beg for forgiveness. His father quickly sees through his play acting to his real motive and quickly admonishes him for trying to publicly humiliate him. While Demeas was in the wrong, he was privately so and that fundamentally is the moral of the play. No matter what happens behind closed doors, it is the family's job, despite the sometimes vague interpretation of family, to keep private matters private.
at October 10, 2013