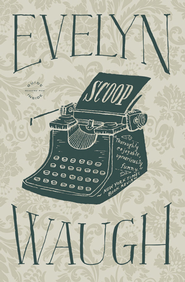 The book begins with two cases of mistaken identities. The first being between the notorious and prolific writer John Courtney Boot and his obscure country cousin, also a writer but as the author of Lush Places a nature column for The Daily Beast, a job which had been passed on to him by the widow on the death of its previous owner. William, although at first reluctant to take on such an auspicious column, with diligence and perseverance has slowly come to enjoy his column and the writing now comes to him virtually without effort, bringing us to the second case of mistaken identity.

William's sister Priscilla, as a joke one afternoon, carefully went through her brothers column about the daily habits and lifestyle of the country badger, one of his more "finished essays" and throughout substituted "badger" for "the crested grebe," resulting in a public outcry and communal rage at its publication with readers writing in with their horror and disapproval:

"His mail had been prodigious; some correspondents were skeptical, others derisive; one lady wrote to ask whether she read him aright in thinking he condoned the practice of baiting these rare and beautiful birds with terriers and deliberately destroying their earthy homes; how could this be tolerated in the so-called twentieth century? A major in Wales challenged him categorically to produce a single authenticated case of a great crested grebe attacking young rabbits..."

William anxiously prepares to defend himself to Lord Copper ("no man shall call me a liar unchastised. The great crested grebe does hibernate...")

While William waits for what he assumes will be his dismissal, it is proposed to Lord Copper, a newspaper magnate and proprietor of The Daily Beast that the perfect reporter to cover the brewing war in the African Republic of Ishmaelia would be John Boot, and after receiving the tip he promptly tells his editor to quickly hire Mr. Boot at whatever cost and send him on his way. Lord Copper fails to specify which Boot he means and the editors after discovering William working for them hidden away in the bowels of the Nature section, quickly call him to London for his quick promotion and speedily dispatch him off to the African continent.

While he waits for his passport and sundry items deemed necessary for travel to a foreign and inhospitable continent he is put up in a small hotel where the surroundings are dramatically different from his semi-poverty stricken room on his family's country estate.

"The room was large and faultless. A psychologist, hired from Cambridge, had planned the decorations - magenta and gamboge; colors which - it had been demonstrated by experiments on poultry and mice - conduce to a mood of dignified gaiety..."

Finally William arrives in Ishmaelia and despite his lack of experience and general ineptitude, somehow manages to get the "scoop" while spending a prodigious amount of the newspapers money for such necessary items as inflatable canoes, boxed Christmas dinners and a young German girls promised ability to get "tips" and infiltrate the top echelon of government power for stories to report home. News of his success quickly circulates and he becomes a sort of newspaper celebrity; as he returns to London the country is awash in awe for this young indomitable reporter who faced certain death to write the story of a lifetime. While the Newspaper quickly tries to capitalize on their young reporters celebrity status, William is anxious to get back to his quiet life of genteel poverty far from the hubbub of the city and quietly returns to his family estate.

Lord Copper, to further capitalize on William's success asks his editor to ask the Prime Minister for a knighthood for his reporter, but again after first names are left unspecified, John Boot the author is knighted instead. The Beast hires John Boot and quickly sends him off to Antarctica to report and simultaneously cover up the misunderstanding.