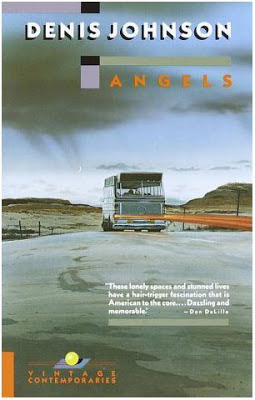 Part of the American Dream is the ability to recreate yourself, the ability to face insurmountable odds and emerge victorious, to push our own sisyphean boulders towards the top of the hill and have the faith that they will roll forwards instead of back.
This book is about everyone else. Those who must live the antithesis of the dream in the grim, gritty reality of life.

Written in 1983, Angels is chronologically the sequel to Tree of Smoke and continues the narrative of broken people clinging to each other, nails gripping the edge of sanity through the maelstrom of the catastrophic.

We meet Jamie on a bus, her two little daughters in tow, she is leaving her cheating husband, unsure of where she is going she goes, pressing forward with the hope that anything has to be better than the life she's leaving behind.

"In the Oakland Greyhound all the people were dwarfs, and they pushed and shoved to get on the bus, even cutting in ahead of the two nuns, who were there first. The two nuns smiled sweetly at Miranda and Baby Ellen...but Jamie could sense that they found her make-up too thick, her pants too tight. They knew she was leaving her husband and figure she'd turn for a life of whoring. She wanted to tell them what was what, but you can't talk to a Catholic."

On the bus she  meets Bill Houston, drifting at this point, struggling with the aftermath of the Vietnam war and the ravaged crevices of his soul. Although an unlikely couple, Jamie and Bill find solace, to a degree, in each others company and the trip becomes waylaid in one rest stop and grungy hotel after another. Eventually after a clash over their diminishing funds they part ways and Bill heads to Chicago, where Jamie eventually follows only to be brutally raped. Bill eventually finds her and picks up the pieces of her increasingly shattered and broken personhood and brings her to the family estate in Arizona, a place littered with broken cars and hopeless people.

In Arizona Bill and Jamie are now thrown together with the rest of the clan, Burris, James and a superstitious old mother with the signs of dementia percolating through her incessant chatter. James, who was somewhat the star of "Tree of Smoke" now has become a war addled abusive drunk. The hope and childish immortality of the young James have been replaced by an angry man stuck in a quagmire of suffocated ambitions, asphyxiated by his own flaccid ineffectual dreams, constantly reliving the horror of Vietnam in the banalities of everyday life.

"...as he walked beside the road he felt his anger burning up in the heat of noon, and saw himself, as he often did when he was outdoors on hot days, being forged in enormous fires for some purpose beyond his imagining. He was only walking down a street toward a barroom, and yet it seemed to him - it was not the first time- that he belonged in Hell, and would always find himself joyful in its midst. It seemed to him that to touch James Houston was to touch one iota of the vast grit that made the desert and hid the fires at the center of the earth..."

Eventually the Houston brothers come up with a scheme to rob a bank, a "foolproof" plot that can only go terribly wrong, and Bill finds himself in prison facing the death penalty while Jamie is sent to an asylum to get help with her substance abuse and to relocate herself into the realm of the sane, still hopeful that one day she will be that person with a piano in the living room, and daughters that sit at the dining room table with their homework. Her visions are not of grandeur but for the mundane normalcy of a life continually beyond her grasp.

Although Denis Johnson is an incredible writer, this was very obviously a first novel. While his other novels tend to situate themselves in the gritty interstitial realm between life and death, where even without hope there is still possibility, Angels seems fixated on death, every moment one extended prologue of the inevitable. As Johnson's work matures he dwells less on the finality of life and more on the beauty buried deep within the grime and detritus of everyday life for the marginal and all those whose dreams remain forever buried in the recesses of the heart.