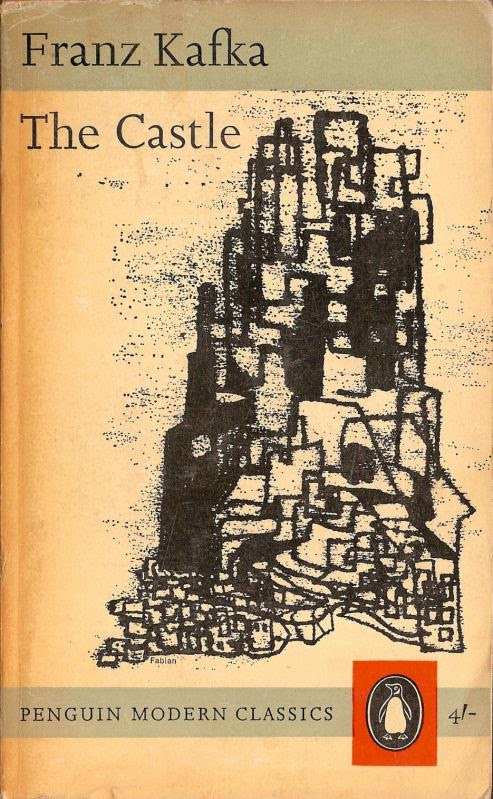 I love to read Kafka when I'm depressed. It localizes my depression into one finite entity. As I finish the last page and close the book there is such a wave of relief to be finished that I find any lingering depression absolved.

We're moving to Germany in less than a month. I'm excited about this opportunity for adventure...but nervous about leaving my twin. We've never gone a day, that I can remember, without talking to each other for the last 10 years or so...in a way I think I'm defined by our relationship; when the murky chaos of life presents a grey impenetrable fog, and I am unable to see a reflection of myself...it is my twin that often brushes aside the clouds and allows a glimmer of sun to penetrate. Who will I be without her?

Who am I? Is a question I think our protagonist, K. can relate to. He has been called to a small village at the foot of the Castle to take over the position of Land Surveyor, but upon arrival is dismissed by the locals and finds his goal of actually making it to the Castle an improbability piled upon the impossible. As he seeks an anchor to tether himself in the quicksand of impervious truth, he stumbles upon Frieda, the barmaid of an upstanding inn. If he can not get to the Castle, perhaps he can get to Klamm, a high ranking Castle official and Freida's alleged lover.

At this point his goals are completely off track. He has begun his quest to simply be a Land Surveyor, but the fact that no one will acknowledge his presence or even the fact that he has actually been summoned, makes him obsessed with following the thread of misinformation that will hopefully lead him to his objective: a tête-à-tête with anyone of substance. Klamm seems to be the golden nugget at the end of a mythical rainbow that K. must blindly navigate towards. With each step of progress a new character is introduced to sit him down and have an inhumanely long conversation about how everything he has been led to believe thus far is all a lie. With each new telling, the narrative becomes more and more amorphous. Is Frieda K.'s comrade in arms? Or the sinister Siren leading him ever farther from his goal, and with each step closer to his destruction?

More importantly is everyone incredibly simplistic and ignorant? Or is it just a ruse to keep feeding K. misinformation. Is there a singular plot against him? One day someone, somewhere decided it would be fun to singularly destroy the life of a Land Surveyor? Or is it simply a question of geography? Perhaps this one place, this on Castle, is so backward that once someone, for whatever reason, slips through the looking glass to this nether world all hope is lost and one is drowned in the bureaucratic tape that holds everything tirelessly in place.

K. is an indefatigable protagonist. Nothing will keep him from scrutinizing every detail, of following every lead no matter how unpromising it may appear. However, unlike Sherlock Holmes, or any Willkie Collins protagonist...this is not a sensational mystery to be solved. And instead of clues leading him ever closer to resolution, he instead chases an infinite supply of red herring in an ocean that refuses to yield to lucidity.

Unlike some of Kafka's other protagonists, K.'s task of truth finding is self imposed. There are so many opportunities for him to hang up his deerstalker and leave this miserable little town with Freida; they could begin a new life any where except here where his knotted fate, like a nervous tick, torments him unrelentingly. But K. is ultimately a seeker, on a quest for the meaning of things; his identity as a Land Surveyor comes with all the accouterments of the trade, ie. a need for measuring, mapping and identifying the physical world. Like August Esch, the accountant in The Anarchist, who can only make sense of a world schema of checks and balances, K. must identify the world he is a part of. But K.'s world refuses to be mapped and charted and is uncompromisingly hostile to those wishing to excavate beyond the surface.

In a somewhat rambling narrative given by Olga, a compatriot in arms in the fight against the injustice of this place, we learn that Olga's family, once prosperous has been shunned for the last 3 years because her younger sister refused to sleep with a city official, or perhaps because she insulted the messenger. For whatever reason, and with barely any discussion, their friends and family slowly took leave of them, leaving them isolated, destitute and crippled as Olga's parents, steeped in regret, regress to an infantile state where their only objective is waiting to die. Throughout this narrative we learn that Barnabas, the messenger given exclusively to K., and Olga's younger brother, has his doubts about whether or not he is actually a messenger. He is certainly called and detained in an antechamber to some unidentified official, but is it real work that he is doing? Or is it all merely another way the City toys with those out of favor? Olga is bogged down in a quagmire of doubt, but she is resilient; there are other ways to become a Messenger, and she has not given up hope for her families survival.

After K. leaves his discussion with Olga, he learns that Freida was incapable of waiting for him for more than 10 minutes and has moved back to her old position as barmaid, has given up their engagement and want's nothing further to do with K.. From the beginning it has been unclear as to whether or not K. is simply using her for his purpose to access Klamm. His initial meeting with Frieda, definitely lacked the requisite wooing you would expect from someone "falling in love" and erred more on the "two warm bodies in the same proximity might as well make the best of it" genre. But for some reason K. believes losing Frieda means losing his one entry point to Klamm and so he must fight for their "relationship" in the most passive and  unconvincing way possible.

As K. confronts Freida, realizing his old assistant is at that moment in her room and perhaps even her bed, he seems more preoccupied with getting a bite to eat and finding a place to rest. He has been allowed into the bedroom hallway of the Inn to wait for a meeting he was supposed to have with a City official, and as he struggles to remember the right door to the correct official, he stumbles into the room occupied by Burgel, another peon in the inexhaustible hall of mirrors. Burgel, awakened from a sound sleep, begins prattling on endlessly, he invites K. to sit on the edge of his bed and while K. drifts in and out of consciousness, Burgel tells him the only way to beat the system, is to go on the offensive and attack when the bureaucracy least expects it, for example in the middle of the night. If one were to surprise a City official in the middle of the night, one could ask for what ever one wanted, to be officially reinstated as chief Land Surveyor, for example, really whatever one's heart desires for the element of surprise, coupled with the desire to go back to bed would force the official to grant any and all requests. K., unfortunately is asleep. The quiet soothing, monotonous droning of Burgel has lulled him to sleep and has denied him his glimpse of the unobscured. Burgel talks passionately on the pros and cons of night interrogations, while K. sleeps on, unaware of the opportunity that has passed him by.

When K. finally is dragged from sleep to yet another night meeting, it is as ineffectual as he expected. Exhausted, hungry in a stupor he slumps into a pile in the hall and watches the morning chaos of the messengers commence. It is not long before his presence is ousted though and he is forced to go down into the bar and begrudgingly allowed to sleep behind a barrel, only to be wakened by Peppi, the deposed barmaid, who feeling annoyed and disgruntled about her position must tell K. her version of history, and we, enduring our own form of torture are forced to listen once again to a monologue that calls black white, day night and reality once again is toppled head first into a cesspool of the obscure.

Finally the landlady, discovering K. attempts to give him a lecture, but is too preoccupied by a comment he made about her dress and instead of lecturing him decides to hire him on as a sort of dress maker/ assessor...that is if he decides not to become a chamber maid along with Peppi.

After reading Hermann Broch, Kafka's writing seems almost harsh and diluted. It is not beautiful writing. You do not get lost in the narrative. While both authors in a way tackle the disintegration of meaning/morals they do so from completely different sides of the elephant. Broch is an expansive, challenging writer; the world he creates is in a way more terrifying because it truly exists. The enemies are given names and they are formidable. Kafka's writing by comparison feels listless and monotonous. While in the Metamorphosis  Gregor Samsa in the end does become a terrifying insect of some sort...it's actually more terrifying that someone could commit cold blooded murder on a friend in a moment of war torn chaos and then transform from a monster into an accepted member of society.

The Castle lacks an element of the surreal and terrifying that one would expect from Kafka, and perhaps that would salvage the story and keep a modicum of interest alive for the reader, instead it is a monotonously opaque world where the narrative limps along on the endless retelling of a story no one was particularly interested to hear in the first place. In short, once finished, the perfect antidote to depression.
at June 15, 2014