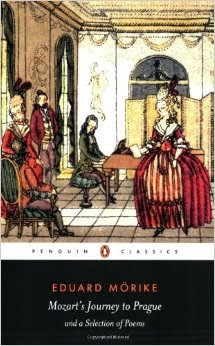 Mörike's career as a poet began in 1824 with the publication of On a Winter Morning before Sunrise and would span more than four decades. While his poetry is well known in Germany, chiefly as the texts of songs, he is virtually unheard of in the English speaking world. In an unfortunate way, he owes most of his recognition to others, such as the composers that set his stanzas to music, and even his most well acclaimed novella, Mozart's Journey to Prague, has become a footnote to a musical folklore.

Perhaps one of the reasons his work remains largely unread by the English speaking world is that it is a tad inaccessible. Written in the 'Biedermeier' style this narrative poem feels like an opaque dream in which the dreamer is searching for clarity without success.

"It was appropriate to an epoch of extreme political conservatism, the Metternich police state, in which the intellectual middle classes could do little but retire, so to speak, to their respective provinces. If there was a 'Biedermeier' attitude, it is one of disillusioned withdrawal from political engagement of any kind, as well as from passionate love and anything else that might disturb the resigned tranquility, the aurea mediocritas of life."

The introduction, by David Luke, is helpful, and I probably should have read it first, but I found myself pining away for John Reddick. I would have appreciated a few more foot notes to pull me into this otherwise floating realm of poetic realism, something like "Mörike alludes to Mozart's extreme almost maniacal affinity for collecting pinecones..." instead I was given an appendix that simply identified leading characters or people mentioned in passing and a brief sentence of their lifespan and geographical region.

The poem opens with a brief summation:

"In the autumn of 1787 Mozart, accompanied by his wife, travelled to Prague, where he was to stage the first production of Don Giovanni."

In the carriage, as husband and wife make their way through the German countryside, the tension is almost palpable. Will this play be a success? After years of pecuniary hardship and poor remunerations, will this be enough to finally pay their creditors? Written thirty years after this poem takes place, the readers would have been aware of the opera's wild success. Almost one-hundred and forty years later Don Giovanni is currently tenth on the Operabase list of the most-performed operas worldwide, but despite Don Giovanni's success Mozart would never fully emerge from his financial hardships.

Mozart seems to have developed socially only slightly beyond that of a toddler. By page two we realize he has accidentally spilt an entire bottle of expensive cologne on himself and while the carriage may have benefitted from this catastrophe, Mrs. Mozart is far from pleased and is a second away from a full fledged lecture, when Mozart decides now would be a perfect moment to take a walk through the beautiful country side.

"Arm in arm, they stepped over the ditch at the side of the road, plunging at once into the shade of the pine-trees...The refreshing chill, suddenly contrasting with the heat outside, might have proved dangerous to the carefree traveller had his prudent companion not induced him, with some difficulty, to put on the coat which she was holding in readiness."

As Mozart pockets an assortment of pinecones, they climb back into the carriage to finally make their way to their lodgings after a long day of travel.

"That black-faced lad by his charcoal kiln, he knows exactly as much as I do about a whole lot of things, even though I too have a wish and a fancy to take a look at many matters that just don't happen to be in my line of business."

While refreshingly transparent and humble, I'm sure Mrs. Mozart would have wished her husband to have taken a minute or too to acquaint himself with family finances and other such practical matters. Mozart, instead seems to live in a fantasy word of sonatas and etudes, lost in the lyricism of a new chord while his wife scurries around building the physical world they inhabit.

As the journey progresses, Mozart's childish delight at finding pinecones and breathing fresh air takes a turn for the somber. A little black cloud hovers over our protagonist as he ruminates on the transitory nature of life.

"And meanwhile life goes by, it runs and rushes past - Oh God, once you start on such thoughts, what a sweat of fear you break into!"

Now it is Mrs. Mozart's job to fabricate stories of their reception in Prague, about the wealth and fame that will follow them home and about the new tapestries and decor their now modern and updated house will luxuriate in. Her tales of their imagined successes do seem to rouse Mozart from his momentary apathy, but like a twitch, a premonition of an early death haunts him. Each second is filled with an intensity, knowing his last could be just around the corner, and to each moment he brings his full attention; happily enraptured by a perfectly ripe orange and ready to invest all of himself at a moments notice in a strangers celebration.

While Mozart absent-mindedly picks an orange setting in motion an interview with the Lord and Lady of the estate, he finds himself first mistaken as a thief and then embraced as the brilliant composer. The festivities underway are the wedding preparations of Eugenie, the daughter of the manor and a kindred spirit to our protagonist.

The rest of the poem feels like an acquaintance free associating for an endless eternity, the narrative is frequently put on hiatus and another adorable story or narrative introduced. Of course Mozart must explain/defend his actions/criminal orange picking, and so a long story about the spring of 1770 and a sea performance in Naples. Then Mrs. Mozart tells a story of their financial hardships combined with Mozart's adorable need to defend rural maidens. Then another story of the moment Mozart composed the final acts of Don Giovanni...

It seems like Mozart would be the perfect dinner party guest, filled with an exhaustive supply of stories mixing in range from hilarious to sombre and if that doesn't fit the mood why not saunter over to the salon where he can entertain your guest endlessly with his musical genius! His hosts extend their hospitality and demand the Mozarts stay at their house and then upon their departure they give them a carriage!

As they drive away, Eugenie is left with a premonition of Mozart's impending death. Her friends and family brush her off, but she has read between the lines and seen the heartache and despondency quietly festering in our protagonists soul.

The narrative ends with one of Mörike's own poem:

In the woods, who know where,
Stands a green fir-tree;
A rosebush, who can tell,
Blooms in what garden?
Already they have been chosen-
Oh soul, remember!-
To take root on your grave,
For they must grow there.

Out on the meadow two
Black steeds are grazing,
And homewards to the town
They trot so sprightly.
They will be walking when
They draw your coffin;
Who knows but that may be
Even before they shed
That iron on their hooves
That glints so brightly.
at May 22, 2015