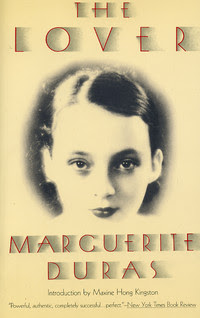 Surprisingly, despite the fact that Duras is a prolific writer and has profoundly impacted modern cinema, this is the first time I have come across any of her work. In a way, I think this is the best way to be introduced to her, with a clean slate and impressionable palette.

Described on the cover as "the hypnotic bestseller" I braced myself for the unknown while traveling back from the states on my own, with a toddler in tow. I needed something to become fully absorbed in and drown out the chronic fatigue that was only momentarily held at bay. Despite the daydreamer quality of the writing (each paragraph jumps to another subject and another time) I found this small novel to be the perfect portal into another world.

We are introduced to our unnamed protagonist as she makes her way, alone, on a ferry, crossing the Mekong River. She is fifteen and as way of introduction has briefly discussed the temporal nature of the face. Perhaps there was a time when she was beautiful, perhaps her face has always been the mask she wears that she neither belongs to nor truly represents who she is.

"I often think of the image only I can see now, and of which I've never spoken. It's always there, in the same silence, amazing. Its the only image of myself I like, the only one in which I recognize myself, in which I delight."

Her manic-depressive mother has dragged our heroine and her two older brothers to pre-war Indochina, where the mother teaches at a girls school and the family scrimps along on their meagerly earnings. Here in this world, despite their destitution, the fact that they are French, or rather white, allows them to socially outrank just about everyone. So they live a life of impoverished arrogance filled with disturbing familial chaos. The older brother is a gambler and slowly item by item, mortgage by mortgage takes what little the family has and reduces them even further into the dregs of poverty.

As we meet our heroine on the ferry, she is trying to come to terms with her place, in society, as a young woman, and as a form of diaspora. As she makes her way down the gangplank she notices a limousine parked at the docks and seemingly waiting for her. She brazenly makes eyes at the Chinese man, 12 years her senior and she can tell she unnerves him. Even though he is the son of a business magnate and infamous millionaire, she outranks him by the color of her skin and the shape of her eyes.

Perhaps she is initially curious about how far this will go, maybe she feels claustrophobic in her world of familial instability, maybe she hopes the rabbit trail will lead to a hot meal, whatever the initial reason she quickly begins an affair with the Chinese man. It is within these moments alone that they are both distilled into the simplicity of time and place, two bodies using each other "unto death."

At first their affair is kept hidden, but eventually they realize they are invisible. The boarding school prefers to have a few white faces to keep the prestige established, so our heroine is allowed to come and go as she pleases with hardly even a lecture, in fact her mother defends her freedoms, saying that if they put too much restrictions on her she'll just run away. She is alone, forced to be captain of a small rudderless ship, taken here and there along the flotsam of fate.

Jennifer Wicke, who was an associate professor of comparative literature at New York University, describes the French writing sensibility that Duras exemplifies in an article for the New York Times ("The Life and Loves of Marguerite Duras" Oct.20, 1991):

"Duras's writing is always at an extremity, and that is quite French, " she said. "I see her as carrying on the tradition of l'amour fou, the crazed love. It's a bleak world view, the opposite of a lyrical text. It proposes a tragic end, because desire can't be sustained. It will either turn into obsession and, thus, ultimately destroy its object, or it will see itself be deflated by the very cruel contingencies of history, or death."

It is interesting to compare  The Princess of Cleaves, the seminal "French Novel" to this equally influential work. While the The Princess of Cleaves deals with two very desirable people, both "gifts of nature" in both beauty and intellect, and caught in the purgatory of unfulfilled desire yet chained there by a sense of compulsive duty and virtue, The Lovers inhabits the exact opposite side of the spectrum. Instead of the girl and the Chinese man being desirable, both are representations of "unnatural love", the girl because she is just that, a girl of fifteen, fatherless and defenseless against even her own base nature, and the man because in an xenophobic culture, there can be little worse than having an affair with someone barely deemed human. Yet, in both cases love can not be sustained, either because unfulfilled desire is requisite for love to exist as the Princess of Cleaves would suggest, or because the act of love exists in another realm from the soul and without a sense of self and a knowledge of one's face - there can be no true intimacy of the soul.

Rather than a narrative of two souls that missed each other by mere seconds and now must spend the rest of their lives paying penance for their inability to anticipate the future, our subjects in The Lovers were always destined to miss each other even while holding each other in the moonlight and sharing secret intimacies- rather than being seen, they are distilled into bodies wrestling for place and supremacy in a world on the cusp of war and heartache.

"My brothers never will say a word to him, it's as if he were invisible to them, as if for them he weren't solid enough to be perceived, seen or heard. This is because he adores me, but it's taken for granted I don't love him, that I'm with him for the money, that I can't love him, it's impossible, that he could take any sort of treatment from me and still go on loving me. This is because he's a Chinese, because he's not a white man. "

The family decides to condescend to meet the man and they pick an expensive restaurant to gorge themselves at while he quietly and deferentially picks up the bill.  In these moments with her family, the girl falls into the expected pattern of intentional blindness and requisite silence.

Eventually both the girl and the man must go their separate ways. The man's father has arranged a marriage for his son years in advance and his inheritance is contingent on him accepting his fate. The girl slowly grows up, jaded and disappointed with her inability to truly see herself, as her face ages and continues to take on an unrecognizable form.  Separate from her outer shell her soul hovers about the surface of lost memories and unfulfilled hope. Our heroine is destined to experience a loneliness that eats at the soul and leaves it's impression, like tendrils of sorrow, across the face.

After a little research into Duras, I found myself liking this semi-autobiographic work much less. Written when Duras was 70 and already an iconic French author, all the xenophobia and racism I was surprised by the lack of, actually exists in the real subject and makes the storytelling feel forced and self congratulatory. While for the young girl of the novel this tryst is little more than a physical experiment, behind the facade of impenetrability one wonders if she is capable of returning the love. There is no question of requited love with the real Duras. While there may be power shifts and consuming infatuation, it always ends flatteringly with the girl (i.e. Duras) being the one with the unflinching control.

In the last line of the book, years later, after wars and broken marriages, the Chinese man calls the girl and once more, these many years later, professes his love.

"Then he didn't know what to say. And then he told her. Told her that it was as before, that he still loved her, he could never stop loving her, that he'd love her until death."
at July 28, 2015