The Satires of Juvenal 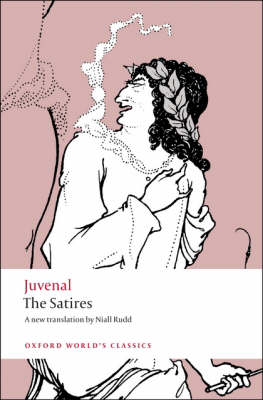 Initially, things were looking pretty good for Juvenal. Privileged upbringing? Check. Officer in the Roman army? Check. But then his career began to stall. He failed to get one promotion after another and slowly found himself becoming embittered. Despite his efforts he has been unable to ingratiate himself into the court life of Emperor Dimitian and remained pigeonholed in a failed career; forced to beg scraps from the tables of the rich to support his meager lifestyle.

"...When the voice of the satirist, aged forty-five, is raised in Rome, he is poor, a client haunting the vestibules of the rich to collect his dole. Obviously his plans for advancement after military service under the wing of the imperial court had collapsed, and he is bitter about the nouveaux riches, the foreigners, the corrupt aristocrats- everything." (The Satires of Juvenal, Translated by Hubert Creekmore, 1963)

Eventually, feeling frustrated and stymied by contemporary politics he takes to his pen. He writes a satire exposing the fact that in Dimition's court favorites have unmitigated power and influence. Juvenal is subsequently banished, possibly to Egypt, possibly to the remote frontier town of Syene.

In his defense, Domitian was kind of full of himself. He had nominated himself the perpetual censor, attempting to control both public and private morals, and saw himself as the new Augustus, enlightened, wise and the preordained guide to lead the Roman Empire into a new era of wealth and brilliance. He slowly cultivates a cult of personality, grooming the contemporary propaganda to speak well of his brilliant endeavors and gloss over his premature balding.

Part 1 of Juvenal's Satire is entitled: "Why Write Satire" and some of his reasoning is as follows:

When limp-limbed eunuchs take wives;
when husky Maevia slits
Wild boars in the games and clamps
a spear between naked tits;
When a barber who scraped my beard in
youth has a bigger pile
Of wealth than all the nobility;
when the scum of the Nile,
Crispinus, ex-slave from Canopus,
around his shoulder flings
A cloak of Tyrian cloth and wafts a
hot weather gold ring
In the air on his sweating finger,
unable to bear thereupon
The extra weight of a heavier jewel-
when this goes on
It's hard to keep from writing satire.

Recognizing the danger of attacking living examples of vice, corruption and immorality, Juvenal takes his examples of the dregs of society from the dead, as such he is virtually immune from attack; although he has been banished and has had all his property confiscated so he nothing left to lose. Using deceased examples for contemporary criticism also illustrates the point that Rome has been on a path to corruption for generations.

"Juvenal's resentment, we may assume, was against those who has come in before and during Domitian's reign, who represented license, perversion, new manners, freed slaves risen to wealth, and in general the new rich. The truth is that Juvenal was clinging to the standards of a bygone age in a time when all was changing. He harks back to the days of the republic, before Julius Ceasar, when men were stern in honor and morals and conduct, and he often cites the early heroes of Rome. That he seems unrealistic in this, since the change from the republic to empire had been made almost a century before his birth, is only slightly surprising.” (Creekmore 1963)

In Juvenal's fourth satire, "Council of State- What to do with a Fish" we find the most directed barb at Dimitian. Told in mock-epic style it is a tale of prodigious greed and flagrant ineptitude.

Juvenal begins the story with Crispinus, that “monster of evil without one redeeming quality.” Crispinus is impoverished, but his destitution has no effect on his avaricious need to consume. One day he comes across a large mullet and purchases the fish for the equivalent of a farm house in the provinces or an estate in Apulia. Purchasing the most expensive fish known to man, while undeniably foolish is not quite evil, and could be almost considered heroic if purchased for the right cause. An example of a good cause: donating the fish to the impoverished or a childless old man.

But Crisinus does no such thing. Rather he sits there and eats the entire fish himself.

We see
a lot of things done
Today that the frugal glutton Apicius
Would have shunned.
Crispinus, did you, who formerly
Wear a G-string supplied
By your native papyrus, pay that price
For a fish? You might
Have purchased the fisherman himself
Perhaps for less.

Everyone agrees that this grotesque level of gluttony boarders on the pathological. But then Juvenal turns our gaze from the mere profligate everyman to the nobility itself. In an oblique way (the baldheaded Nero is none other than the current Emperor Dimitian) he presents the cast of the next story:

When the last of the Flavians was flaying
A world half dead
And Rome was a slave to a baldheaded
Nero, there appeared
In a net in the Adriatic, before the
Shrine that’s reared
To Venus high over Greek Ancona, a
Turbot whose size
Was gigantic.

The fisherman are initially at a loss as to what to do with the fish. The skipper suggests they give it to the chief pontiff, for surely to purchase such a fish would be a crime and to hack it a part would be sacrilegious. The fish monger’s market swarms with informers and no one will risk buying or selling such a fish.

By now unwholesome autumn was yielding
To frost at last,
Malarial patients hoped for relief,
And cold winter’s blast
Kept the fish quite fresh.

After much debate, it is decided that the only way a fish of this magnitude could be caught is if it so desired, so the fish must have surrendered itself for the benefit of the Emperor, for who else would so regal a beast deign to be devoured by?

The senators gathers together and decides this is true, the fish has recognized the deity of the balding emperor and has offered himself a sacrifice for consumption, but now what? The fish is too large to cook whole and it would be a desecration to serve such delectable to mere mortals. The senators easily convince the emperor not only that this fish belongs to him, but that he is entitled to it.

For who would
Not nowadays be aware
Of Patrician tricks? Who’d think that
old-fashioned ruse you achieved,
Brutus, was wonderful? Kings wearing
Beards are easily deceived.

As the emperor preens himself over his greatness, the senator’s trip over themselves trying to outdo one another with toadying and flattery. The next suggestion, is that not only was the turbot a sign of the natural world’s recognition of their supreme sovereign, but the fish is also an omen of a great victory.

The only solution is to make an enormous clay vessel that can embrace the circumference of the fish and cook it then and there. Suggestions of festivals are offered. Future policy on the accessibility of potters is put forward. The senators debate and discuss at length until after midnight, eventually retreating to their homes, confident of their rhetorical ability to talk at great length about the merits and complications of large fish, while actually accomplishing nothing.

Even so, If only he had devoted to
Trifling nonsense
Like this all those days of cruelty
And violence
When he robbed the city of its most
Noble and brilliant souls,
Unpunished, with none to avenge!
But once he began to hold
Great terror for men in the lower
Classes, he was killed,
Soaked in the noble Lamain blood
That he had spilled.