As I Lay Dying -William Faulkner 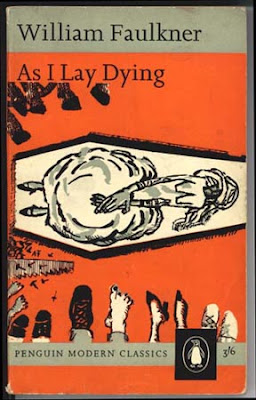 As I lay Dying is an exercise in the chaotic failure of language. The world has been rocked by the aftermath of WWI, where men looked around them and were forced to reassess a world order that no longer made sense. The orgiastic 1920’s have vanished like a dream.The world that Faulkner creates in the beginning of the 1930’s is fractured and broken and each character is forced to slowly pick up the pieces of themselves and hold themselves together in a way that seems continuously on the verge of falling apart.

The story is told through fifteen different focalizers, each with a different perspective and point of view. This creates a novel where reading becomes an active experience rather than passive. This is not the type of novel you can read at night with a cup of tea to escape the chaos of life…this is the chaos of life distilled into roughly 260 pages and it demands attention and focus. Without an objective narrator there is no objective truth. There is no center. The reader is forced into something textually resembling a piece of abstract art and finding one’s bearing in this densely packed landscape can be incredibly challenging.

“The front, the conical facade with the square orifice of doorway broken only by the square squat shape of the coffin on the sawhorses like a cubistic bug, come into relief.” (Darl, 219)1

There is a type of sensory overload to the text as well. The reader is exposed to a barrage of sights, smells (“sulfurous,” the slowly decaying body, etc), sounds (the chuck, chuck, chuck of the saw,) and tastes. All of this plunges the reader viscerally into the context of the narrative.

The plot line itself is fairly simple at first glance: As the narrative begins, the matriarch of the Bundren family is on her death bed. Her son Cash stands in the courtyard, just outside her bedroom window and builds her coffin, holding each piece of wood up for her inspection. When she finally dies the family wraps her in a quilt, covers her face which has holes bored through it by the youngest son, thinking he was rescuing her from her entrapment, and they begin their trek to Jefferson where they will bury Addie in her family’s plot.

But then slowly everything unravels.

In Puritanism to Postmodernism, Ruland and Bradbury argue that: “…what dominated the 1920’s was the postwar novel- the novel permeated by war as an apocalyptic metaphor, the sign of a world severed from its past, changed, darkened, modernized…the writing of the 1920’s abounds in images of fragmentation, waste, castration and sterility.”  2

Fragmentation is a great way to describe this novel. The main focalizing voice is that of Darl, whose origination begins with a 'verbal trick':

“Then I found that I had Darl. At first I would not believe it. Then I believed I would kill Anse. It was though he had tricked me, hidden within word like within a paper screen and struck me in the back through it. But then I realized that I had been tricked by words older than Anse or love, and that the same word had tricked Anse too, and that my revenge would be that he would never know that I was taking revenge.” (Addie, 172)

Darl’s character is distilled into verbal processing, wrestling with a system of language that is ultimately broken. He is given the largest portion of narration, but seems to be the least heard and most misunderstood character in the family. The more one communicates the more isolated and alienated they become. For the modernists, language is little more than each of us tricking each other and being tricked by the impossibility of ever really truly understanding each other’s reality.

Darl also represents the collateral damage of the first World War. We find out towards the end of the novel that he is suffering from shell shock having served in the trenches in some capacity during the war: “Darl had a little spy-glass he got in France at the War. In it it had a woman and a pig with two backs and no face.” (Darl, 254)

This realization coming at the end of the novel, forces the reader to reassess his reliability as a narrating voice and wrestle with the protean definitions of insanity.

In some capacity, the metaphor of a spyglass becomes a cue on how we are to read this novel. Darl’s spy glass and distorted vision is juxtaposed with Tull’s spy glass and vision of ownership and destiny. Tull is one of the few outside “objective” focalizers that is supposed to ground the reader in the world outside of the chaos of the Bundren family, but we are left questioning whether or not his sight or vision is truly tenable or just a mirage.

“When I looked back at my mule it was like he was one of these here spy-glasses and I could look at him standing there and see all the broad land and my house sweated often it like it was more the sweat, the broader the land…”(Tull, 139)

For Tull, the objective outside perspective that should provide a counterpoint to the Bundrens’ narrative and ground their perspectives in a less abstract reality, we see optimism and ownership. The power to consume; the doctrine of Manifest Destiny. But Darl’s spy glass has revealed a completely different world. A world comprised of distorted pig-women, a world where the intelligible falls apart. This is the Modern world, gruesome and chaotic without equilibrium. Throughout the text we hear echoes of Yeats poem: “Things fall apart, the center cannot hold; Mere anarchy is loosed upon the world…” 3

As a family, the Bundrens are doing more than just traveling for 6 days across the inhospitable world to bury their mother, they are predominantly wrestling with the effects of modernism, with things falling apart. Rather than pulling the family together into a “bund”: a league or confederacy, their wrestling drives them apart into individualized and unique isolation.

Addie’s monologue does a couple important things. First it offers a new “spy glass” for the reader to view the narrative context within. Prior to this moment, it would have been feasible to believe that the family, with the direction and guidance of the father, Anse, were making this trip to Jefferson out of love and affection for their mother/wife. After her monologue this view is no longer possible. Their marriage was not based on “love.” (Arguably either “love” or “hope” was the word that had tricked them.) Rather, their marriage was ground in a type of selfish haunting of each other.

Addie’s description of Anse as “a tall bird hunched in the cold weather,” (170) portends the buzzards that will eventually follow the coffin, hoping to pick apart and devour the carrion within. Does Addie metaphorically become the buzzard? Watching her family’s slow progression as they subject her remains to one atrocity after another. Is she haunting her family, growing in number as they get closer and closer to Jefferson, her origination point?

From the beginning their marriage has embodied a type of relational carrion, neither person is fully alive, and both circle the coffins of each other’s flesh waiting to bite off pieces of decaying soul.

“When Anse finally sent for me of his own accord, I said “He has wore her out at last.” And I said a damn good thing, and at first I would not go because there might be something I could do and I would have to haul her back, by God.” (Peabody, 41)

So after Addie’s monologue we realize that far from a noble quest of an honorable burial in Jefferson, so she can be laid to rest with her family…the burial has actually become an excuse to go to Jefferson to purchase new teeth….something Anse has been waiting for fifteen years to acquire. In some sense he has been metaphorically circling Addie for fifteen years, waiting for her to die, so that he would have an excuse to make this trip and create a new beginning for himself.

The phrase “I won’t begrudge her”/“She won’t begrudge me” seems to mask the fact that begrudging each other has been the bedrock of their relationship. She tries to curse him with an impossible journey, but her curse becomes little more than an empty threat. Anse takes her body on a six day journey, after waiting three days for the boys to get back from an errand…with each hour that goes by her body begins to breakdown with “little trickling bursts of secret and murmurous bubbling.” (Darl, 212) As if even in death she’s attempting to communicate. Attempting to persuade or explain, yet being reduced to a language even more incomprehensible than her last.

Addie has had a vision of Jewel rescuing her from water and fire. But her monologue is inserted at the point in the narrative where the family is attempting to cross a flooded river, an aggressive and hostile River Styx, not ushering the family to the peace of the afterlife, but to the reality of the hell which they already inhabit. She is already dead and her coffin keeps slipping into the water at risk of being swept away and unmemorialized. Is this what she had in mind?

Again, through Addie’s monologue we see the struggle and failures of language, which is also her struggle with the modernist world of which she is a part. “Things fall apart, the center cannot hold…” there is no center for language. Barthe’s “cultural codes” have been broken, there are no shared symbols or signs in the residual chaos. ‘Spy glass’ means different things for everyone, there is no shared sight or vision. The actual words Addie uses challenge our sense of normative grammar, and the reader is forced to almost physically wrestle with the language she uses, looking for things between the lines, looking for our own spy glass to create a sense of shared intelligibility:

“I would think how words go straight up in thin line, quick and harmless, and how terribly doings goes along the earth, cloning to it, so that after a while the two lines are too far apart for the same person to straddle from one to the other.” (Addie, 173)