“One of my mental complications - horrible beyond words - is a fear of insanity, which itself is insanity.”
Pessoa - October 30, 1908 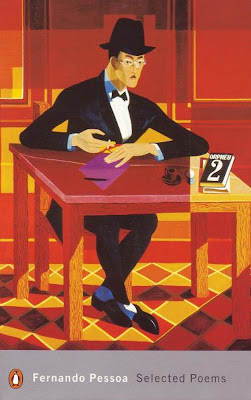 I’m about to embark on what I hope will be a long and profitable love affair with Portuguese poetry. The thing that I love about this canon project is that it always broadens my horizons beyond the known and expected. There are moments (this past month) when I began to wonder if eight years of this was enough…how will I know when to stop? Is there ever a good stopping point? I very obviously will never finish this project unless somehow A. I learn to read faster or the Matrix becomes real and I can just download books into my brain or B. The great minds of science figure out a way one could read while being cryogenically frozen…but since neither option seems imminent or very likely…

I almost stopped this month. I called my sister and told her maybe it was time to be done. I’ve learned a lot…maybe it’s time to throw in the towel. She wasn’t an explicit “yes”…and so almost reluctantly I picked up a book of poetry by Pessoa, and then as usually happens, was transported down the rabbit hole into a world beyond my ken or imagination. And so, Pessoa has become the perfect gateway drug into Portuguese literature and poetry and for the time being the project will continue with reignited passion with no foreseeable end in sight. I have too many questions and rabbit trails to follow at this point.

This post will be more an introduction into Pessoa and the questions I will begin to follow than a traditional essay.

Perhaps there is no greater modernist than the Portuguese poet Fernando Pessoa (1888-1935). With the modernist obsession with fracturing and dislocation, Pessoa embodies this fractured sensibility with a whole new fervor, taking on the identities of three other poets and a coterie of seventy-two different personalities. For Pessoa, identity is fluid and complex, and his heteronyms allow him to submerge himself into this complexity rather than continuously wrestle with it.

According to Jonathon Griffin (1) “Pessoa was a poet who wrote poets as well as poems.” Each of his different poets have markedly different styles and voices. Pessoa created histories for his personalities beyond the page and frequently found himself an observer to their dramatic arguments rather than a possessor of them.

According to George Steiner:

“Pseudonymous writing is not rare in literature or philosophy (Kierkegaard provides a celebrated instance.) ‘Heteronyms’ as Pessoa called and defined them, are something different and exceedingly strange. For each of his ‘voices’, Pessoa conceived a highly distinct poetic idiom and technique, a complex biography, a context of literary influence and polemics, and most arrestingly of all, subtle interrelations and reciprocities of awareness. Octavio Paz defines Caeiro as ‘everything that Pessoa is not and more.’ He is a man magnificently at home in nature, a virtuouso of pre-Christian innocence, almost a Portuguese teacher of Zen. Reis is a stoic Horatian, a pagan believer in fate, a player with classical myths less original than Caeiro, but more representative of modern symbolism. De Campos emerges as a Whitmanesque futurist, a dreamer in drunkenness, the Dionysian singer of what is oceanic and windswept in Lisbon. None of this triad resembles the metaphysical solitude, the sense of being an occultist medium which characterizes Pessoa’s ‘own’ intimate verse.” (2)

Suddenly a hand, part of some occult haunting,
Between the folds of the night and of my sleep
Shakes me, and I awake, and in the deep
Neglect of night discern no face or movement.

Yet an old terror I have, immanent
And unburied, as though from a king’s siege
Descends, and affirms itself my liege
Without command, without threat, without taunting.

And I can feel my life - how on a string
Of Unconscious abruptly tightening
I am, by some nocturnal hand, controlled.

I feel that I am no one, only shade,
Of a face I don’t see, being in its shade,
And in nothing exist as the dark’s cold.

The enjambment leaves the reader with a sense of unpredictability and tension. The repetition of ‘without’ creates an echoing effect of isolation, alone with oneself in a chasm of impenetrability. The mood is haunting and somber, precariously held together by a ‘string’… The poem opens with a disembodied hand, and ends with the narrator realizing he is but a disembodied face, or rather a “shade of a face I don’t see, being in its shade.” His life is controlled by a disembodied puppeteer, and the narrator stands at its mercy; identity and “selfhood” being ambiguous, mercurial and always beyond grasp.   As mentioned above, Pessoa takes the modern movement’s preference for flux over stasis and internalizes it, he’s flotsam along his own stream of consciousness.

Alberto Caeiro, the bucolic, “uneducated” poet, writes almost exclusively in free verse and is described by Octavio Paz as: “..the sun in whose orbit, Reis, Campos, and Pessoa himself rotate. In each are particles of negation or unreality. Reis believes in form, Campos in sensation, Pessoa in symbols. Caeiro doesn’t believe in anything. He exists.” (4) Perhaps I will circle back and do an entire essay on “The Keeper of Sheep” but for now here are a few excerpts I found intriguing:

To think is uncomfortable like walking in the rain
When the wind is rising and it looks like raining more.

I have no ambitions or wants.
To be a poet is no ambition of mine.
It is my way of staying alone.

[…]
When I sit down to write verses,
Or, as I walk along the roads or short cuts,
Write verses on the paper that is in my thought,
I feel a shepherd’s crook in my hands
And see and outline of myself
There on the hill-crest,
Listening for my flock and seeing my ideas,
Or listening for my ideas and seeing my flock,
And smiling vaguely like a man who does not
understand what is being said
And tries to pretend he understands.

Very Zen. I’d like to spend a lot of time on Caeiro, it’s easy to see why he’s described as the ‘master.’ His writing is stripped down and bare and yet so incredibly evocative. I love the chiastic: listening for my flock and seeing my ideas, or listening for my ideas and seeing my flock,” there’s almost a similar disembodied hand leading both the ideas and flocks on a imperceptible string. Again beneath the surface is the problem of communication, but here Caeiro is comfortable with the fact that knowledge is illusory and unattainable.

Ricardo Reis, a physician, writes in mostly metrical but unrhymed poetry influenced in part by Horace and Catullus. The poem I picked for Reis, “Legion Live in Us” (13.11.1935) is less Horatian and more to the point of dissociation:

Legion live in us;
I think or feel and don’t know
Who it is thinking, feeling.
I am merely the place
Where the thinking or feeling is.

I have more souls than one.
There are more ‘I’s than myself.
And still I exist
Indifferent to all.
I silence them: I speak.

The crisscross thrusts
Of what I feel or don’t feel
Dispute in the I I am.
Unknown. They dictate nothing
To the I I know. I write.

By 1914 Pessoa was aware that he was no longer “himself.” In a letter to Armando Cortes-Rodrigues he writes: “I am no longer myself. I am a fragment of myself kept in an abandoned museum”  and  “I am like a room filled with fantastic mirrors that falsely reflect a single previous reality that isn’t in any of them and is in all of them.” (5) In answer to how he knows which heteronym is doing the writing, Pessoa says that Reis is the better writer but with a “purism I find excessive.” (6)

And lastly Alvaro de Campos, the naval engineer/ adventurist, influenced by the Italian futurists and in constant dialogue with Walt Whitman. De Campos is the blackguard of the group, writing scathing manifestos and publicly critiquing the works and opinions of Pessoa, and occasionally writing/publishing poetry while drunk and broken hearted, such as “Ah Margarida” in which this postscript says: “Dictated by the naval engineer, Sr. Alvaro de Campos, in a state of alcoholic unconsciousness.”

Here’s an excerpt from “Triumphal Ode”:

Ah, to be able to express myself whole as a motor expresses itself!
To be complete like a machine!
To be able to go through life triumphal like an automobile, the very latest model!
Be able at least to permeate myself physically with all that,
Rip myself right open, lay myself bare completely,
render myself passive
To all the oil and heat and carbon perfumes
Of that stupendous, black, artificial and insatiable
flora!

I’m looking forward to the day when I can chuckle and say things like “That’s so typical of De Campos and his mechanical modernism…” (I should probably be holding a glass of bourbon while I say this.) It’s easy to see why De Campos and Pessoa were frequently at odds, occasionally rebutting Pessoa’s views in literary publications. De Campos seems to have a thing for a good simile…my quick take away from this excerpt is thus:

Beneath the exclamations and presented awe at the mechanical age, lurks in the background the horrors of mechanical warfare and mass slaughter of the first World War. And like Pessoa, but from a different angle is the problem of identity and communication. The narrative voice is envious of being truly known in a way impossible for mere mortals of the modernist age. And while the ‘latest model’ is proud and triumphant, for a lonely ineffectual poet, there’s the hovering anxiety of being remembered and triumphant only in death.