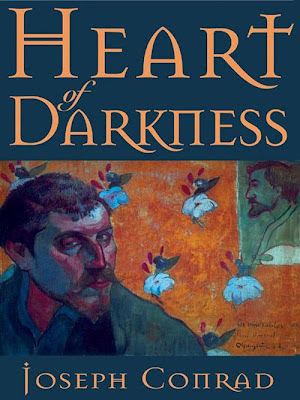 Heart of Darkness retells the story of Marlow's job as an ivory transporter down the Congo. Through his journey, Marlow develops an intense interest in investigating Kurtz, an ivory-procurement agent, and Marlow is shocked upon seeing what the European traders have done to the natives.

Marlow begins telling the story of his adventures through the Congo to some of his shipmates one night out at sea while the sun slowly sets and the story envelopes them. Marlow was looking for adventure, looking for the exotic and when he finally was given charge of a ship he began his trek into a foreign land.

On his way to the camp he is struck by a chain gang of skeletal shadows, the humanity stripped from them, they toiled up the hill ahead of Marlow looking as if each one was close to taking his last step...Marlow is horrified by the inhumanity of this strange country where men are regulated to little more than animals based on the color of their skin.

When he finally gets to the camp he finds his ship is in disrepair and he spends months waiting for parts and trying to rig his ship back together as best as possible, meanwhile the bureaucracy is exposed as a virtually inefficient mercenary enterprise. He leaves as quickly as he can and begins the dangerous trek to find Kurts, who at this point he has begun to deify. He has imaginary conversations with Kurts and defends his name when slighted...only to reach Kurts camp and find yet another dissolution waiting for him. Kurts is nothing more than a psychotic, mercenary, megalomaniac. Capable of the kind of cruelty that had become commonplace in the Congo and justified by the search for ivory.

Kurts is unwell and dies on the ship, his last moments are ones filled with the horror of the immense cruelty he had inflicted on the natives he came into contact with the the utter darkness and depravity of the Congo.

He cried in a whisper at some image, at some vision—he cried out twice, a cry that was no more than a breath—"The horror! The horror!"
at February 23, 2012