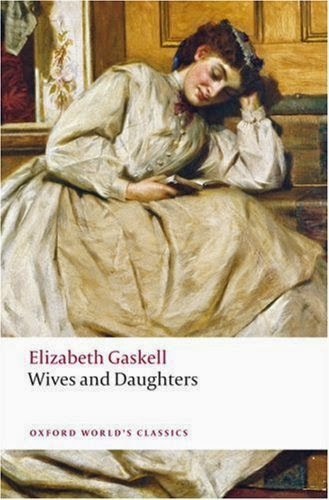 First of all, I love this story, I have seen the BBC movie multiple times and it has always been the perfect antidote to depression. Not so the book.

At first I was swept up into the minutiae of this "Every-Day Story," Molly Gibson is as charming as ever, the perfect semi-educated, not too beautiful heroine that we must learn to love and appreciate as a foreign specimen under a microscope. It is with careful observation that she is tested and proved the superior object in contrast to her beautiful, coquettish step-sister. But while one learns to appreciate all of Molly's quiet unobtrusive charms, which happens in about 5 pages, one must suffer through another 600 pages of the most banal of "fairytales".

I found this book to be frustrating on so many levels. Unlike Margaret Hale, the protagonist of an earlier novel, North and South, little "goosey" Molly Gibson is the prim and proper quiet little angel that never argues or presumably raises her voice, except for one moment where she breaks character and somewhat chews Lady Harriet out for referring to her friends, the Miss Brownings, as Pecksy and Flapsy. While I commend Molly's flushed, red in the face defiance of a member of the peerage...I only wish she was that spirited for the duration of the book, instead she receives insult upon insult with only a quiet tear here and there while she comforts herself in the quiet solitude of her lonely heart.

North and South was an industrial novel and as such there was the requisite soliloquies on labor laws and unions, and while Margaret was passive in a way, she had the gumption to throw herself in front of an angry mob to protect a man she somewhat despised. Molly feels like the heroine you would write if you were on vacation and thinking of ways to extend a book contract in order to secretly purchase a little country house as a surprise for your husband. Allegedly, Charles Dickens, a friend and her editor at times encouraged her to get to the point in a more expedited manner and that's saying something.

There is a bit of the cherry-picking from ones life that also adds a certain lazy character writing. Mr. Gibson, a Scot (like Gaskell's own father) in a sly way represents how wrong educated men can sometimes be. In an attempt to save Molly's maidenhood, he hastily marries an old friend of his and recent widow, with her own daughter about Molly's age, Cynthia. The irony is that Molly is the most pragmatic and chaste of the three women and more apt to keep her own virtue unsullied on her own than with the help of the new duo. In fact, it is from this very hasty marriage, that Molly must defend and protect her new sister from one scandal after another - sullying her name and for a while becoming an untouchable to the small Hollingford community. Of course Cynthia is too beautiful and full of her many charms to spend much thought on the inconvenience of others and instead mesmerizes and entraps one suitor after another, ending the book with four proposals and a marriage.

One of her many misguided suitors is the good Roger Hamley, who although does not actually develop as a character, after being jilted happens to look around the room, and when Molly has on a new dress and her hair done in an elaborate way, finally is capable of noticing her. This is horrible, disgusting and everything I hate about fluffy romance plotlines. While the reader is supposed to admire and appreciate her for her many qualities, it isn't until she's wearing a new dress that she gets noticed by the second hand love interest. And while Roger is supposed to represent this new age of "Muscular Christianity" and the advent of Naturalism, loosely based on Gaskell's cousin, Charles Darwin, I'm sure if Darwin ever condescended to read this book it would be a distasteful likeness. While Gaskell paints Roger as a scientific researcher, going on all sorts of expeditions on his own veritable "Beagle" she also makes him a romantic. And after two years gallivanting around , contracting one travelers disease after another, having his brother die and his fiancé run off with another man he comes home a burly, bearded bear of a man and is impressed with silk? I feel like it would have been a bit more true to the point if we saw his own hastily scrawled pros vs. cons list with "constant companion, (friend in old age) who will feel interested in one, object to be beloved and played with - better than a dog anyhow - home and someone to take care of the house...ergo I will propose to Molly Gibson!"

As I was reading this book, I felt so frustrated by the lazy uninspired portrayal of women. Molly sits quietly by, waiting for what good or bad fate has in store for her.  While Cynthia, is far from idle, constantly flirting with anyone wearing pants, there is still the same sort of ineffectual lack of agency. She threatens to become a governess in Russia whenever she is feeling particularly provoked...and one wishes she would have made good on her threat and exited the narrative scene stage left. Then of course there's Mrs. Gibson the provocateur of all ones fetid hates distilled into a single character. Her monologues are literally endless and while Gaskell died suddenly and was unable to finish the book, the unfortunate ending is given to Mrs. Gibson's endless prattling:

"You might have allowed me to beg for a new gown for you, Molly, when you knew how much I admired that figured silk at Brown's the other day. And of course, I can't be too selfish as to get it for myself, and you to have nothing. You should learn to understand the wishes of other people. Still, on the whole, you are a dear, sweet girl, and I only wish - well, I know what I wish; only dear papa does not like it to be talked about. And now cover me up close, and let me go to sleep, and dream about my dear Cynthia and my new shawl!"

Overall, I can not help feeling a certain sadness for Gaskell, what a terrible book to go out on. Gaskell contributed to the same magazines as Anthony Trollope (The Way We Live Now)  and Wilkie Collins (The Moonstone) both of which had more respect for their heroines than Gaskell. While Gaskell's heroines are weakly, fainting types that are constantly in need of a big burly man to rescue them both Collins and Trollope treat their heroines with far more respect. Granted Marian Farley, the heroine of The Woman in White was an ugly George Elliot type that was brilliant at unraveling one web of intrigue after another but was unmarriageable and destined to spend her days with her beautiful and marriageable damsel in distress half sister.

It's almost impossible to compare Gaskell and Trollope except to say Trollope wins. He is expansive while she is simplistic. His characters grow and transform while hers live one dimensional lives waiting for their writer to have her way with them. While Trollope champions the cause of women and the complexities their limited options allow them, they are all astute and pragmatic regarding what they want and what bull they must grab by the horns. His women are forced into creative forms of entrepreneurship as they struggle actively to take agency in their fates while Gaskell's are forced to wait idly by for their men to eventually recognize them and by doing so breathe legitimacy into their ineffectual lives.
at October 03, 2014