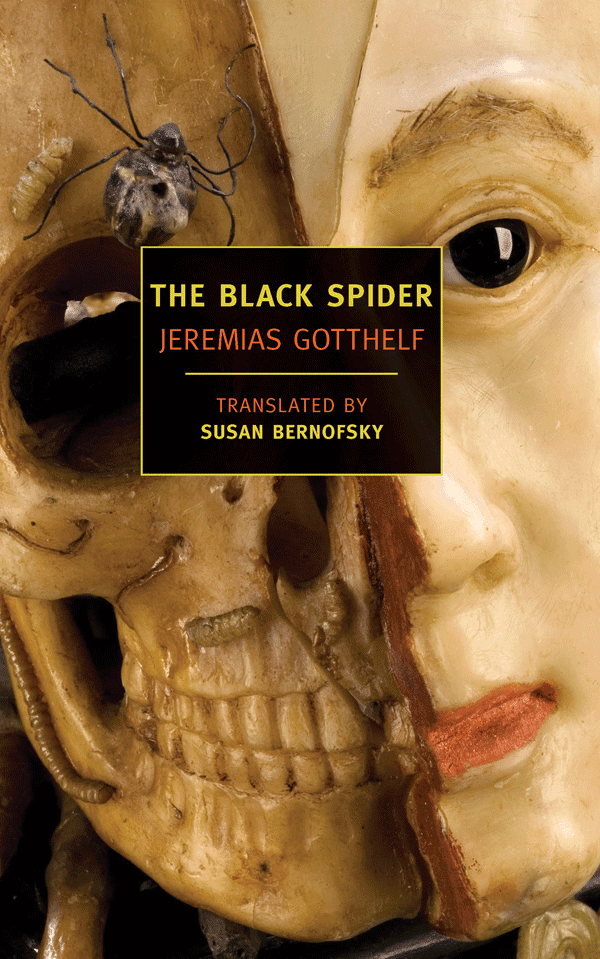 When my sister and I were 7, my father brought home The Wrath of Khan for movie night one night and I was forever scarred. Here's what I remember: a guy makes Khan mad, so Khan, or one of his minions, puts a grub-like thing into the space suit helmet of the guy and then steps back and watches as the grub-like thing crawls all over his face and then into his brain where it takes over his willpower and holds the guy hostage to its varyingly grotesque whims and desires. To this day when feeling overly stressed I have to sleep with a hat on just in case spiders, grubs, worms, etc. or their henchmen decide to invade my brain.

Lets just say that The Black Spider makes The Wrath of Khan look like a children's story. I was hoping that "Black Spider" was used metaphorically...but no, this book genuinely will give substance to my nightmares, or rather insomnia, for the rest of my life. (Also the picture on the cover, which showed part of a face being eaten by a spider was way too intense for nighttime reading and I had to cover it with a nice soothing picture of a watch in order to even hold the book without getting nightmares simply through osmosis.)

This makes me sound a little on the neurotic side, hey I really don't like spiders and I especially do not like narratives that involve anything burrowing into people's faces and then hatching their spiderlings in torrents out of ones cheeks...but I'm getting ahead of myself.

The narrative of "the black spider" is bookended by the hustle and bustle of a baptismal celebration. The story opens with the godmother arriving and being fed enormous quantities of food and then hustled off to the church, where in the rush and chaos she forgets to ask what the child's name is and spends a few moments of dread hoping the priest doesn't ask her. Thankfully the priest knows the name already and as she breaths a sigh of relief she tells the others of her near calamity and they all walk back to the house laughing and in a generally jovial mood. More food is consumed and then the grandfather begins to tell his story, which is the kind of story that would keep delinquents on the straight and narrow for the rest of their lives and prompt the apathetic into a life of intense bible memorization.

The basic take-away is that no one can make a pact with the devil with the assumption that either a) one could outsmart Satan or b) maybe Satan would forget his required remunerations. There are no winners when one engages with the devil, only incredible pain and heartache; the unfortunate lot of mankind is to never fully comprehend this lesson.

One day a knight comes to the land and demands his laborers to build him a castle. When the castle is just barely finished he comes up with new demands; he wants one hundred full grown beech trees moved from one side of a mountain to another in the span of one month. While the laborers beg the knight to be reasonable, he threatens them with dire consequences if they fail to comply with his demands. The work proves to be nearly impossible though, and as the laborers debate about what to do, a strange little woodsman with a red feather in his cap appears and says that for a small price he would be willing to transport the trees. The men are terrified and instead of engaging the strange man run away and try once again to move heaven and earth with merely their limited brawn.

Enter Christine, the perfect antihero for a xenophobic insular culture. She is a fearless Bavarian, too clever and daring for her own good.  When she realizes the men are moping about without a solution she decides to take matters into her own hands and when the little green man materializes again she strikes up a bargain...which is really less of a bargain and more of her just agreeing to the terms that are offered, ie. an unbaptized child to be delivered to the woodsman upon completion of the new forest. As a sign of agreement, the devil kisses Christine on the cheek, planting a seed in her cheek that will quietly sit and wait for its moment of germination.

The trees are planted and the devil waits for the birth of child for his payment. Christine thinks as long as all children are baptized at birth, there will be no way for the devil to claim his prize and so with bated breath the townspeople wait and watch as the first baby is born and then quickly baptized, snatched from the gates of hell and redeemed. Christine, momentarily breaths a sigh of relief but almost instantaneously notices a pain in her cheek, a prickling sensation that begins to grow and burn on the very spot the woodsman had kissed her.

As another woman prepares to give birth, Christine is in agony. "The closer the day of the birth approached, the more terrible the burning in her cheek became, and the more the black spot swelled, stretching distinct legs out from its center and sprouting little hairs; shiny points and stripes appeared on its back, the bump became a head, and from it flashed glinting, venomous glances, as if from two eyes."

With the second baby rescued from damnation, Christine's face ruptures and an infinite cadre of spiders make their way out of her face and into the valley, killing all the livestock and lying in wait for unsuspecting living things to cross their paths.

At this point the laborers have turned on Christine. Although she has initially saved them from their inability to plant the one hundred trees and the subsequent consequences, and although they were supportive of her plan, now all they want is a scape goat to placate the devil and remove the plague of spiders. Christine, at this point consumed in a fiery web of spidery tendrils, has no hope of survival, but it is not her death that was the bargain but the life of an unbaptized infant. And so again the laborers look around for a baby to deliver to the devil.

Lets just say the rest of the story disintegrates into Christine being sprinkled with holy water and melting into a little ball that takes on the life of the spider. Her anger is now not only directed at an unbaptized child but at all the townspeople that failed to respect her..and eventually everyone that happens to be alive within a certain radius. No one is spared, until at last Christine's mother, an old pious woman, gives her life for the safety of others and in exchange earns a respite of two hundred years from the dreaded spider.

At this point, the grandfather's narrative pauses, and all the guests are offered more food. Reluctantly they make their way to the table to have lunch and pretend that they are not traumatized by this horrific story.

But after lunch, there's more! After two hundred years the townspeople became apathetic; they began to forget God and to taunt the devil. So the spider makes a reappearance to devour everything in its wake yet again, leaving only the righteous and small orphaned children with upright hearts. Eventually, again someone must come forward and take responsibility. This time it is an heir of Christine's family, Christen.

Christen offers himself and again the spider is placated. This time seemingly for good, and the spider is no longer feared, because the fear of God buttressed the people with hope.

"Soon everything was quiet outside the house... it sheltered the good people in their sweet slumber - the sort of slumber enjoyed by those who carry the fear of God and a good conscience in their breasts, and who will never be awoken from this slumber by the black spider, but only by friendly sunshine. For where belief dwells, the spider may not stir, neither by day nor by night. But what strength it can attain when beliefs and temperaments change is known only to the One who knows all things and who gives to each his powers: both to spiders and to men."

Thank God this book is over. I'm now going to go drink a bottle of port and memorize the book of psalms in case I need to ward off any man eating spiders.
at January 17, 2015