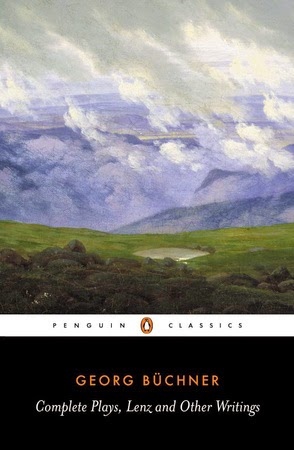 This is one of the most complex plays I have read. Published in 1835, Büchner was a modernist decades before that movement garnered traction; his writing style is a mosaic of ideas and themes, the sacred and profane harshly juxtaposed within the same space. While the plot is somewhat straightforward, Danton, a hero of the French Revolution has outworn his welcome and the masses (goaded by Robespierre) demand his beheading, what gives the play its substance is the political maelstrom these characters find themselves drowning in.

Historically, this play takes place over the course of thirteen days during the last violent shuddering of the Revolution, March 24 - April 5 of 1794. At this point the Revolution is steeped in failure; the carnage of a broken system is evident in every scene.

Georges Danton was a brilliant lawyer and orator and for three months the leader of the revolutionary government. Being exhausted by the never ending bloodshed, he has turned his position to one favoring negotiation and seeking governmental stabilization, which immediately labels him as an indulgent. It is not long before a ruse is invented to get him out of the way. As the play opens, he has become disillusioned and jaded by the incessant and now seemingly trivial bloodletting and has fallen into a stupor of nihilism.

Scene 1: An unidentified room of ill repute. Herault is at a gambling table surrounded by prostitutes, while Danton and his wife Julie site nearby discussing philosophy.

Danton: Look at the pretty lady: handles her cards like a real little angel! She certainly knows how to play her suits: shows her heart to her husband, so they say - and her 'diamond' to her lovers. You women, you could make a man fall in love with lies.

Julie: Do you believe in me?

Danton: How should I know? We know damn all about each other. Thick-skinned elephants, that's what we are; we stretch out our hands to each other, but it's a waste of time, hide grating on hide, that's all- we're on our own, completely on our own.

Danton is described as a mastiff of a man, energetic, and mercurial. He enjoyed the sensual pleasures life had to offer and the first two times we see him he is in the presence of prostitutes, the first time incidentally.

In the first scene, it is left to Danton's friend Herault, to lay out the contentious ideology of the Dantonists:

Herault:...The revolution must end and the Republic must begin. The basic principles of the state must change: instead of duties - rights; instead of virtue - well-being; instead of punishment - protection. Everyone must be able to come fully into their own and assert their own nature. No matter whether they're reasonable or unreasonable, educated or uneducated, good or bad: that's no business of the state's. We're all idiots and no one else has the right to inflict his own particular idiocy on anyone else....

This statement is in direct opposition to Robespierre's dogmatic stance, and so we are introduced to the contention: is the basic principle of the state rights, well-being and protection or is it to ensure a higher system of values and morals by which all citizens must abide.

Robespierre's version of things is closer to "There are only two kinds of citizens: the good and the bad. The Republic owes to the good its protection and to the bad it owes only death." (note 101)

As Herault finishes pontificating in the brothel, Danton asks who will champion this cause? How will such policy be put into action? The answer he is given is: "why us and the honest folk of France!" To which Danton responds without much enthusiasm: "Your 'and' is a very long word..."

Within seconds we are introduced to these 'honest folk of France' in the form of a husband and wife in the middle of a marital dispute brought on by a bought of drinking. A crowd forms around them asking what's wrong. The daughter has become a prostitute, seemingly at the behest of the mother, in order to provide for the family. This incites the already fomenting crowd into a rage. Of course mothers and daughter must whore themselves to survive, but they are not to be blamed, rather blame must be on the lecherous men taking advantage of their destitution:

1st Citizen:...Ergo, you work and they do nothing; ergo, you earned it and they have stolen it; ergo, if you want to get back a few pence of your stolen property, you have to go whoring and begging; ergo, they're rats and must be destroyed!

And within seconds they have attempted to string up an innocent bystander that happened to have a handkerchief.  Are his fingers not good enough? Is he putting on airs? Will he be raping our wives and daughters next? Hang him!

1st Citizen: We are the people and we want no law, ergo our will is law, ergo in the name of the law there is no law, ergo kill the lot of them!

These are the masses in whom so much faith and hope has been placed, they are protean in their wants and insatiable in their demands.

Büchner then dives even deeper into the fray; what if you're a prostitute because that's your nature? What if this is who you are and the life you have chosen? As a case study, in scene 5 we are introduced to Marion, a prostitute that interrupts her other duties to tell Danton her life story, one of longing and misunderstood desire. As she and Danton wrestle with ontology and predestination they are interrupted by the news of a rumor that Danton will be tried and beheaded. Danton has been discussing the benefit of death, somewhat passively and romantically, but this news is jarring even for a philosopher.

After a discussion with Robespierre on the demand for 'virtue' and the need for conscience, Danton rejects both contentions by saying "Our conscience is a mirror! - only idiots are bothered by what they see there..." Is it anyone's business to be the moral police for others? If they don't mind the filth they live in why clean it for them? "Everyone behaves according to his nature: we do what we do because it's what does us good."  Danton believes that a person is a body, first and foremost, intrinsically destined to follow the ebb and flow of desires and impulses, a thesis which Robespierre rejects whole heartedly:

Robespierre: ...The mind enacts more deeds in a single hour than our lumbering bodies can achieve in the space of years. The sin is in the thought. Whether thoughts become deeds, acted out by the body, is a matter of chance.

Robespierre sees himself in the role of a sort of messiah, while not sacrificing himself, he will make sure to sacrifice others until all shall be redeemed, the blood of the damned the propitiation for the just.

A few nights later, before his arrest, Danton enacts his own version of Lady Macbeth, wringing his hands and crying out 'September' in his sleep. There is blood on his hands and he must wrestle with the conscience he denied. During the September massacres, Danton was Minister of Justice and while not orchestrating the butchery that took place, he was aware of it and did nothing to prevent it. Despite or perhaps because of his apathy, he has been complicit in the murders of the innocent. As he lies awake, ruminating over how the murders happened, his wife comes to his aide by post rationalizing his actions. His country needed him, he had to do what he did. In moments his conscience is assuaged and as he makes peace with his demons the crowd comes for his arrest.

Danton's arrest is shocking. If he can be arrested, the hero of the Revolution, the man whose 'sheer energy made him France's savior in 1792', if this man can be arrested, then no one is safe. At first he resists defending himself, but as he discusses his fate and the fate of those imprisoned with him, he decides he must defend himself from the slander that has been thrown against him, if only to educate the people about what this revolution has become.

Mercier:...'The guillotine is the crucible of the Republic!' The spectators cheer, the Romans rub their hands with glee, but none of them realize that every word is the blood-choked scream of another victim. Just follow your slogan through to the point where they turn into flesh and blood. Look around you: what you see is what you've said - a precise translation of all your words. These miserable wretches, their executioners, the guillotine: they are your speeches come to life. Like Bayezid with his pyramids, you've built your grandiose schemes out of human heads.

Danton does his best to rouse in the people a sense of frustration at what they have become. They ask for bread and are given heads of the guilty. They ask for wine and are given the blood of the damned. But where has this gotten them? Their streets are paved with bones and still there is no end to the murders. As he finishes his defense the people are momentarily on his side. They cry "Long live Danton! Down with the Decemvirate!" But this support lasts barely a page and it is not long before the crowd is festering once again over their indignation at their lack of equality. Why does Danton live in a nice house, with a nice wife and bathes in burgundy? Where did his riches come from if not from plundering the people? Within seconds the crowd has been easily handled and with it's cry now changed it shouts through it's frothing rage: "Long live Robespierre! Down with Danton! Down with the traitor!"

The irony is that Robespierre will eventually fall prey to this same crowd and make the same pilgrimage to face his own executioner. Putting one's faith in the masses is always a dangerous game; there is no innate goodwill and morality, but only a fetid cesspool of villainy and lust.

While the play is shocking and dissociative at times, the fact that having lived through modernism and post-modernism this play still has the capacity to shock is kind of incredible. It was vulgar and profane, but in a way that illuminated the hopelessness of the masses. This play was absolutely fascinating and made more so by the extensive notes and historical background by John Reddick. He made the translation come to life in an incredibly beautiful and accessible way and half way through I ordered Simon Schama's "Citizens: A chronicle of the French Revolution" as he suggested, (it's a good thing that's all he suggested because I fear I am completely in his power.)